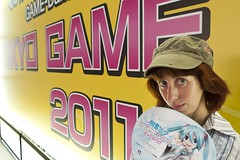 Tokyo Game Show
Originally uploaded by apes_abroad.
The main attraction for us in Tokyo is the Tokyo Game Show. Yes because it's a huge famous game expo, but more because I am presenting Incredipede at Sense of Wonder Night!

SOWN is a two hour show at the Tokyo Game Show showcasing odd and wonderful games. It's a bit of a tonic for the main expo hall. The main hall is all big-budget games which tend to be pretty conservative in their design. If you were spending twenty million dollars you'd be conservative too. I was invited to present Incredipede at SOWN so that's why we're spending a month it Tokyo before leaving to meet Ron and Arlie in the Philippines.

The expo floor itself was pretty fun. Like I said, it was mostly dilled with shooters and rythm games and sequels to shooters and rythm games, but there was some good stuff too. A bunch of asian colleges had really nice booths with a half dozen games each. Their games were reliably bizarre and crazy. Not polished at all, but wacky as hell. So we spent most of our time playing those games.

We also played the new Final Fantasy (what? 13? I dun remember) but playing a game that is all plot and menus is pretty hard when you don't speak the language. We did spend a bunch of time playing Soul Calibur 5 because I can apparently spend any arbitrary amount of time playing Soul Calibur. The Playism [playism.jp] booth was pretty damn rad too. They had a bunch of indie games that were really fun. We ended up hanging out with the playism guys as well as the indies showing at their booth.

One of the stand out oddities was BrainKiss. Two people don headbands and clip a thing to their ear and then stare into each other's eyes. The game then tells you if you are interested in each other. One of the guys who works on it was showing it to us and he spoke perfect English. He was noticeably nervous about a couple playing it. I don't think he had high confidence that it would return the verdict we wanted. But we braved the machine and stared longingly into each other's eyes for fifteen seconds. Sarah apparently loves me but I didn't do so well :/ I blame my nervousness about my talk!

The talk itself was really fun and went really well. I've written more about it here.

The day after the talk we met up with Pierre and his girlfriend Chinatsu. Pierre moved to Tokyo to teach English about four years ago. We met up with him last time we were in Tokyo (about four years ago) and haven't seen him since! It was great fun hanging out with them. We started with lunch and then hit up Kinokuniya books. Kinokuniya is my favorite book store in SF. If you visited us in San Francisco then I probably dragged you there. There aren't many of them in the world, a few in Tokyo and then one in Japan Town SF, but their collection of art, design, photography, and architecture books is amazing. The one in Shinjuku we went to did not disappoint. Among the treasures we were flipping through an amazing frog photography book considering art styles for Incredipede.

Chinatsu knew about a Nepalese fair that was going on in Harijuku so we jumped on a train and headed out there. It was really fun. There must be a fair Nepalese population in Tokyo because there were a lot of vendors with only Nepalese characters on their signs. I walked up to one of these and spied some mutton stew that was fantastic. I get bored of Japanese food pretty fast so this was a really nice switch. Also there was wrestling! High flying, pile driving wrestling! So that was pretty fun. We also took a nice walk in the park to cool down from all the choke-holds.

After that we wandered the streets of Tokyo. This is definitely one of my favorite pass times. We walked past lots of interesting places. Including an invite-only jewelry store, a vw micro-bus with a pizza-oven in it (serving lunch at a farmer's market), a giant lit-from-inside paper mache samurai being paraded around the street being followed by three huge Taiko drums plus lots more. Tokyo is an amazing city. We stopped for coffee in a Blenz (Canadian themed!) before heading off for dinner. Pierre and Chinatsu showed us this amazing neuvo hippy,Indonesian curry place called Magic Spice in Shimokitazawa. Here check out their website, it's a pretty accurate representation of the mood they have going: http://www.magicspice.net/

The food was really terrific and it's one of the few places in Tokyo you can actually get things spicy.

After dinner we wandered into an _amazing_ store called Village Vanguard. It blew my mind three separate times. It was kind of like a party nick-nack shop you might find in Canada but instead of having chincy crap it had amazing stuff. Including: the wooden keyboard I've been lusting after for years (mind blown), a Theo Jansen build-your-own-Theo-Jansen-thing model kit (mind blown) and several Japanese copies of "1000 games you have to play before you die" which happens to contain Fantastic Contraption so I got to show Chinatsu and Pierre my game in print (mind blown).

By that time it was 11:00 and after all the roaming around we were pretty tired so we said farewell for now and headed home. That was yesterday. Today we're taking it easy and just writing a lot of emails and blog posts. Tomorrow? God who knows in this city.
Subscribe
Comments for this post were disabled by the author