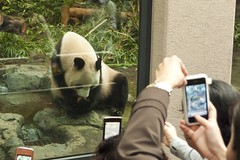 Ueno Panda
Originally uploaded by apes_abroad.
One of the reasons we get a place near Ueno is because it's close to Ueno Zoo one of our favorite places in Tokyo. It's probably the best zoo we've ever been to... I'm not sure who it's really competing with on that front. I don't think any other zoos really come close. And at 7$ it's also one of the most affordable things to do in Tokyo.

Right as soon as we got into the Zoo we saw a change. Previously the adorable little Red Pandas had held the position of prominence near the entrance. Now the Red Pandas have been banished to the bowels of the bear section (they aren't really in bowels, it's a very nice area they live in now). They have been roughly displaced by their bigger, showier cousins the _Giant_ Panda.

Moving on from the Pandas it seems like everything was having babies! There was a baby black bear, a baby kangaroo, baby cats, baby gorilla(!) baby everything! The great thing about youth is it makes you jump around doing stuff and harassing your elders all the time. Which is pretty fun to watch!

I also really like the Marmosets because they're the only animal in the zoo that has any interest in humans. I don't know if it's my facial hair or that I'm always trying to mess with them but they seem to really like me. I could get a little group of them all following me around with their eyes. I like it when animals do this because you can make it difficult for them. You can peek back and forth around a branch or make them swivel their heads back and forth if they are looking behind them. Just some very simple interaction like following your head with their eyes and you can invent an inter-species game. Pretty fun.

I'm incredibly impressed with Ueno Zoo's ability to strip away walls. There's a really big lake filled with giant Lilly leaves. There are some big trees and little islands to one side on the lake which the Ring-Tailed Lemurs get the run of. The Lemurs have no walls, I guess they just don't like to swim. We sat and had some hot chocolate while watching the Lemurs cavort around their domain.

The tiger also put on a hell of a show for us. Stalking around its enclosure and right up to the glass eyeing all the gawkers. You could easily imagine catching sight of one in the jungle and shitting yourself in terror.

So, well done Ueno zoo! We might even go back. There was apparently a baby Black Rhino we didn't see!
Subscribe
Comments for this post were disabled by the author