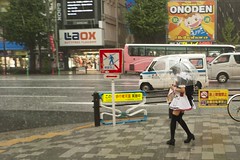 Maid to Work
Originally uploaded by apes_abroad.
We met Justin Potts at the Tokyo Game Show and agreed to meet up another day. The day we chose happened to be the same day a Typhoon hit Tokyo.

We hadn't been to Akihabara yet this time around and it's close enough to walk to so we started the day walking out to Akihabara. It's about an hour walk and was very pleasant. We picked up some snacks along the way and kind of haphazardly wandered towards Akiba.

Akihabara is nuts. It used to be the centre of Japan's electric component industry. It's still a great place to build robots but since the electrical industry has all wandered over to cheaper countries it's burgeoned as the nerd capital of Tokyo. Giant six story arcades, manga cafes everywhere, and it's Tokyo so shit gets pretty weird.

One of the famous things about Akihabara are the maid cafes. Cafes where your waitress dresses like a French maid and serves your coffee in a very demure manner. There are cafes where girls dress up in old-timely Japanese clothes, as cats, you name it. One of the duties of the maid is to pound the pavement and flag down potential customers. I bet on a pleasant day in summer flagging down nerds on the corner is a fine occupation. In the middle of a Typhoon it is less pleasant. But there they were! The dampness probably only adding to the moe.

As the typhoon got into full swing the umbrellas started to snap. I wore a BC style rain jacket and was impervious to the rain and the wind. In Japan the umbrella is pretty much the beginning and the end of rain protection though and typhoons eat umbrellas for lunch!

There is a certain joy in watching umbrellas flip inside out and the fabric tear off snapping spokes like twigs. I don't know what it is. You would think the waste of materials and money and the knowledge that the owner is now going to get well and truly drenched would make it a sad sight. But it's not. There is something magical about an umbrella being destroyed. Something unfailingly kinetic and dramatic.

Every time we stopped at a corner I'd watch for likely umbrellas and secretly root for the wind to quickly change directions and take their owners from behind. I took such glee in the sudden *poof* of an umbrella exploding followed by the battle weary owner's accusative stare of betrayal at their once trusty umbrella.

I don't know why umbrella exploding is so much fun but the local news even dedicated several minutes to umbrella-exploding montages whenever they could get away with it.

Sarah actually went through four umbrellas herself. Every time she lost an umbrella we would pick up a damaged-but-not-wrecked umbrella that had been discarded. She'd truck it along until it exploded and find another one.

So there was definitely some havoc breaking out but we were still keen for dinner with Justin so we decided to head to the train station a little early just in case. Well turns out that wasn't necessary because the trains were simply not running. The subway was at the moment but there was no guarantee that it would continue to be at the end of the night so it looked like dinner was out.

Too bad! We ended up walking home again which was really fun. The rain and the wind was going like crazy but it was very warm. Neither the rain nor the wind had a chill to it at all so it was a very blustery, wet, but warm walk home. It was fun to watch the city cope with the weather. Clearly typhoons are not an unknown here. There were sandbags outside store's doors the day before and everyone was pretty much getting where they needed to be. There were even people riding bikes while holding umbrellas. I dunno how they managed that one.
Subscribe
Comments for this post were disabled by the author