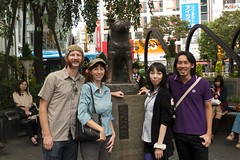 Tomo & Chie
Originally uploaded by apes_abroad.
Yesterday we met up with Naoko's friends Tomo and Chie. Naoko runs a Japanese tea cafe on Vancouver Island we _love_. Whenever we're in the area we drop by for some great tea and sushi. We've become friends and so when she heard we were heading to Tokyo she set us up with Tomo and Chie. We had such a fun day!

Having locals show you around is always the best way to see a place. We started off in Shibuya and we peppered them with questions about fashion and music and how the city works. Shibuya is a centre for fashion conscious kids. Tokyo is very fashion aware and people obviously spend a lot of money on their clothes. We went to the trendiest mall in the trendiest part of Tokyo and it was like a missing puzzle piece. Here was where everyone under 25 in Tokyo was being dressed. The mapping of clothes on the rack to people we'd seen all month on the street was near one-to-one.

From there we headed to Setagaya where Chie had grown up. She knew about this great little bakery. The place was nearly invisible it had some writing on the windowless wall but no distinct bakery feel. Apparently it had been a sushi place previous which I have no problem believing. They only make Japanese style baked goods so we picked up a variety of dumplings with a variety of stuff in them and then headed to the park for a picnic.

On the way we stopped off at a coffee place to pick up something to drink. This place did all their own roasting and I had an amazing espresso.

The park itself was really nice but their kids area was mind-blowing. It was a lot like you'd imagine Peter Pan and the Lost Boys live. It was a wooded area with kind of haphazardly constructed wooden structures with tarps draped over them as slides. Someone had started a camp fire and kids were lighting branches on fire and swinging them around. Other kids were destroying bits of wood with machetes while other kids climbed around on top of an old full-sized steam engine.

It was chaos and heaven! The sort of place that in North America is becoming more and more scarce. It was especially the opposite parenting philosophy of San Francisco. Here it was the law of the jungle and in SF it's an over coddled padded room. It was refreshing to see.

After that we headed up to a craft bazaar that was happening. Here we found the Moneygami guy! We'd seen his stuff somewhere before but still can't quite place where. He does origami with money. Often giving famous presidents, prime ministers and scholars wicked hip-hop hats. His stuff is great! He was putting on little courses in moneygami and selling his books. I sat down and turned a 1,000 yen note into an awesome little hip-hop Hideyo Noguchi.

While we were there we made up some Hexatubes and passed them around. They went over very well. SInce paper folding is much more common thing in Japan people seemed to get the Hexatube much more quickly here than in Canada or the US.

After that we perused the crafts on display. I got my portrait burning into wood which was pretty cool.

By then it was time for dinner and we retired to a bitching little Izakaya. The food was _so good_. Hilights for me include the avocado and tuna slices as well as the kimchi tofu. We all chatted about life, Japan, Canada, how things differed and how they were the same. It was a great evening. I even tried out some of the better Japanese whisky. It was very smooth. Possibly to a fault.

Dinner was great and the company was even better! One our best days in Japan for sure!
Subscribe
Comments for this post were disabled by the author