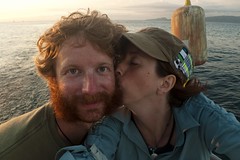 Kiss
Originally uploaded by apes_abroad.
After Tokyo we spent two months in the Philippines with our friends Ron and Arlie, and my god did we have a blast. We stayed in a seaside mansion where we had delicious Filipino food prepared for us nightly, and were visited by friends from across the indie-verse and beyond. We took a lot of pictures, and it seems most of them fit into the categories: sailing, snorkeling... and bugs.

Oh and some photos of me shooting an AK-47 and hiking up to a native Mangyan village with our friend Peter. The expats were super friendly and welcoming, centered around the local yacht club where we had dinner on Friday nights and took a few sailing lessons. The older brits and their young Filipino wives seemed a little colonial at times, but some like Peter were active in the community and helping to promote touristic alternatives to seedy Sabang and boring White Beach.

After the Philippines the two of us spent two weeks in Hong Kong. Unfortunately Colin came down with a mysterious illness and was out of commission for much of it. We stayed in Mong Kok on the Chinese side which has the highest population density in the world, as well as many wonderful markets and whole streets dedicated to aquariums, flowers, and songbirds. Our room was a cozy little breadbasket, bright and quiet and just big enough for a bed and the two of us to stand. We met some eccentric housemates and wrote an iPad game for Colin's mum, which teaches Japanese Katakana using a crossword and photos from our time in Tokyo. We showed it around at an indie game meetup in Hong Kong and people were impressed, so we may release it on the app store eventually.

Christmas with family on Vancouver Island was great as always. It hasn't snowed yet but there's still time before we head down to San Francisco. We'll be there until March or April but haven't decided where to go after that. Europe? Eastern Canada? We'll see...
Subscribe
Comments for this post were disabled by the author