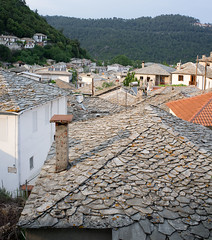 Kitchen Window
Originally uploaded by apes_abroad.
We've been cloistered in our new home on the island of Thassos, Greece, for a couple weeks now. It's so different from Athens we might as well be on the other side of the world. We're living in the little mountain town of Panagia (pronounced Panayhia - it means Virgin/Madonna), which has a population of maybe 400 right now. There are probably more goats and chickens than people.

The streets are so windy and narrow that cars can't make it up to our part of the village, making it very peaceful. A series of canals run beside the roads bringing clear water down from a natural spring. Gardens spill into the streets, and all include grape vines that are starting to show signs of bearing fruit. I wonder if everyone will make their own homebrew wine, or if they combine the grapes from every house together. Wine is one of the exports here along with honey, olive oil, and a shiny white marble they pull out of the big quarry peaking over a nearby hill.

Instead of the iconic Greek red tile roofs, the little white houses in our little Panagia stand out by having slate roofs. Whitewashed stucco covers the traditional stone walls beneath, which looks to me like heaps of rocks and the occasional haphazard wooden board. A surprising number of houses that have been abandoned to the passage of time, including the ruined walls of a neighboring house which we overlook from our ample balcony.

As usual we spend our days on the balcony, reclining with our laptops on two single beds at either end. There's a table between us (the only one in the house), where we eat meals consisting of Greek salad, fresh bread with olive oil & vinegar, and whatever Greek recipe I've tried to implement that day.

There's a bakery and grocery just a few steps down the hill, and trucks come by every morning with loudspeakers announcing fresh vegetables and fish. Further down in the center of town are four restaurant/bars facing eachother, where the men of the town spend their evenings drinking retsina and gossiping. The women sweep homes and putter in their gardens, and have shouted conversations between balconies. The older ladies all wear black blouses and long black skirts. I hear the period of mourning for the death of any family member is 2-5 years, but widows and the especially mournful will wear black for the rest of their lives. It's so common here it almost seems like a fashion statement. Everyone is friendly, although few of them speak English.

They all say "hello" to which we answer "yia sas".
Subscribe
Comments for this post were disabled by the author