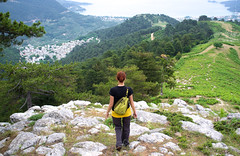 Back Home
Originally uploaded by apes_abroad.
Every morning we wake to the sound of roosters crowing and the distant tinkle of goat bells, which Colin has dubbed the Thassos Orchestra. We work till midafternoon then go for a hike once the day starts to cool off. Almost from our door we can start on a dirt road that meanders up into the hills, where we might come across the afore-mentioned local musicians, grazing and wandering through the fields of flowers and scree, their bells jangling as they shyly trot under the pines to avoid us. They blend in well with the forest. Sometimes it sounds like the goats are so close, but you can't see them.

As it is with the bees. There must be 100 different kinds of flowers blooming in the hills. Honey is one of the local industries so there are bee boxes lining the roads, and at the height of the day you can hear the constant low drone of bees from our balcony. Last week while we were hiking, we were sure we heard a rushing river just ahead. The sound seemed to get quieter as we approached and the hum of bees got louder, until we reached a clearing filled with ferns and practically vibrating with the sound of bees... although eerily we still couldn't see them. There are chapels all over the hillsides here so we dubbed that spot "Our Lady of the Buzzing Bees". I'm pretty sure the bees imitated the river noise to lure us there, but I'm not sure why...

Yesterday we headed up the network of seemingly unused but well maintained dirt roads to what we call "Spider Mountain". Incredipede artist Thomas Shahan has a real love of jumping spiders, and apparently it's contagious because Colin couldn't take ten steps without bending down to wrangle another scurrying creature while I took photographs for identification.

Thanks to this site we learned that the curious holes we found were burrows of the large wolf spider (also known as a 'true' tarantula) Geolycosa vultuosa. We poked a stick down one and were shocked when the hole's owner grabbed the end and tugged it hard. We couldn't lure him far enough out to get a decent look but dimly saw some large yellow mandibles and gleaning eyes, and I now have a very good reason to never put my finger down any hole in the ground, ever.

We were also disturbed by the antlions which are horrible alien creatures like the sand worm from Return of the Jedi, a mouth with huge pincers waiting at the bottom of a sand funnel for ants to fall in. I fed them some of the fat buzzing flies that kept following us for I don't know what reason. Sometimes nature is like a horror movie if you look close enough.

And sometimes it's cute.

We finally made it to the beach last Friday when the weather hit 30 degrees. There's a bus that goes three times a day so we had to time our trip carefully. First, we scrambled around the point and swam off the rocks, then lunch at a lovely restaurant ("Gatos", the Greekest-looking one beside the water with ivy growing on the underside of the palapa roof), followed by an hours walk to the other end of the beach, swimming again in the shallows (much warmer than off the rocks), and exploring the towns of Skala Panagia and Skala Potamia. "Skala" (ladder) is a synonym for a harbor controlled by a town further up the mountain. Except that today those two towns aren't exactly ports. We did see a collection of tiny two-man fishing boats, but mostly Golden Beach is all about the tourist trade.

There must be enough hotel rooms to fit 2,000 tourists down there, but the place was a ghost town and we saw less than 20 other people. That didn't stop restaurants and bars from setting up all their tables, and the beach was marred with hundreds of empty lawn chairs and umbrellas that I assume somebody had to set up every morning. I think this has as much to do with the time of year as the economy, since we saw the same thing when we were in Turkey a couple years ago. Back then we'd argued with one hotel manager that it was mid-June and 32 degrees, so why was the advertised swimming pool still empty? The manager insisted, "it's the off season, nobody wants to swim until July" (but eventually did fill it for us).

Colin and I are happy to visit places during the off season, even if we get the odd rainstorm or typhoon.
Subscribe
Comments for this post were disabled by the author