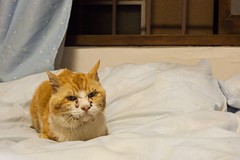 Lost Cat
Originally uploaded by apes_abroad.
We often make friends with stray dogs when we travel, because, well, there are a lot of them in the world. In Panagia, it's cats. Cats on the rooftops, cats in the alleys, cats in the gutters caterwauling at dusk. They're all quite skittish so I took it as a challenge to get one of them to trust me.

I started feeding tiny bits of sausage once a day to a squirlish black and white cat with beautiful green eyes that just stare and stare into mine when I speak to her. The first day I only got her halfway up the steps. The second day she came to the front door and almost ate out of my hand. On the third day she lept to the deck, bolted across the floor and ran into the kitchen, earning herself much yelling and commotion, and the nickname "Houserunner".

Some days Houserunner brings another cat with her who I call "Little Brother" (but is more likely her sister or daughter). This one has the same beautiful eyes and inquisitive stare, and enjoys hiding in the "cat cave" underneath my seat on the deck.

During our first week in Panagia we passed a very pregnant calico, but soon forgot her. Last week she reappeared with three kittens in tow, presumably now 3-4 weeks old. They moved in to a drainage hole in the house across the street, and we had a clear view from our deck of them frolicking in the bushes and clambering around the ruined building next door.

This morning we came out to find only a single black kitten alone in front of their home. He sat there and mewed tiny mournful mews for hours. Where was mom? Where were brother and sister? It was heartbreaking, and made it hard to concentrate. If happiness is a kitten, then sadness is a lost kitten. Eventually there came an answering meow from down the road, and the little guy perked up and scrambled off in that direction.

Several hours later we heard the same mewing and he returned. I brought him a saucer of milk and a nibblet of sausage, mostly to see if he was eating solid food. He went for the sausage, so that answered that. More mewing, then finally came that answering meow again and off he went. What's going on? Is the little kitten just getting lost? Or is mom ditching him on purpose?

Colin doesn't like it when I feed strays. Not because they'll become pests, though that's part of it. He feels bad for how confused and lost they'll be when we stop feeding them. Like they'll get used to free food and forget how to forage for themselves, then after we go they'll pine for that happy full feeling. I'm not sure if Colin's right, but it sure is sad. *sniff*

We love strays but for god's sake people, spay and neuter your pets!

Edit: But wait there's moar! A young spotted mom (The Lynx) just arrived in the ruined house next door with a small army of kittens in tow. Houserunner and Little Bro are there too playing with the kittens. It's a monstrous pile of adorable. How the hell are they going to feed them all??

Edit #2: Lynx and Little Sister (definitely female) seem to be living as a family unit with at least 10 kittens. I didn't know cats did this! They're both nursing and don't seem to know or care whose kittens are whose anymore. Today we watched them move their offspring up onto the hill, which took hours of back and forth and responding to the cries of kittens who got lost along the way (so that's how that happens). Little Sis got fed up by the end and carried the stragglers up by the scruff of their necks.
Subscribe
Comments for this post were disabled by the author